The courthouse was evacuated after discovering 12 types of mold were found in the building. Now commissioners are working quickly to inform the Legislature about the urgency of the situation.

Courthouse functions have been split between the County Commission Boardroom and the Courthouse Annex behind the condemned building. These locations pose security issues on criminal cases and a jury deliberation room is greatly needed.

Wednesday the board was presented with two bids to clean county records held in the building. One from SERVPRO out of panama city and another from Finch Fire-N-Water out of Chipley. Both bids will be considered for the job, SERVPRO totals just over $50,000 and Finch just over S25,000.

According to Washington County Commissioner, Alan Bush, a new courthouse will cost nearly eight million dollars, leaving the county to seek the majority of funding from the state, “By increasing some of the fees possibly on traffic citations and some other things without impacting the ad valorem taxes, we can generate somewhere in the neighborhood of 1.7 million that we can put towards this project.”

Next week commissioners will select the mold removal specialist for the job. Funding for the project will come from the general revenue fund. 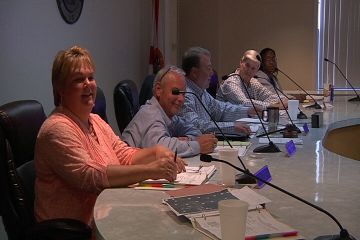